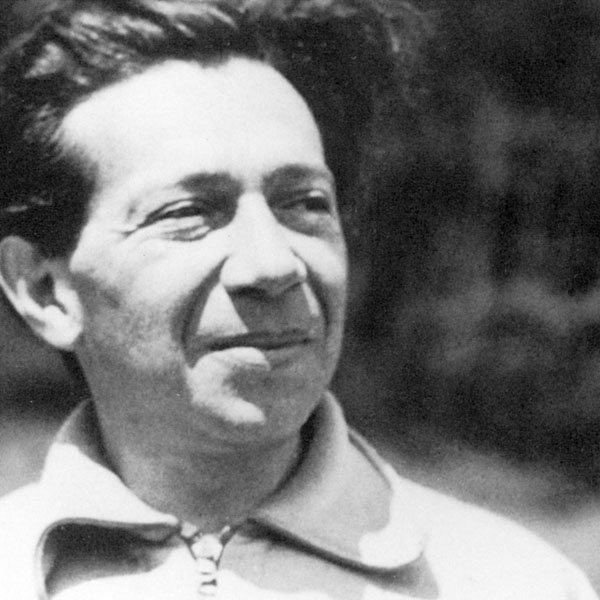 Frederick Hollander was born to German parents in London on October 18, 1896. His father Victor was a widely acclaimed composer of revues, operettas and popular songs, still known today for his "Kirschen in Nachbars Garten" and "Schaukellied." Frederick grew up in Berlin, surrounded by an exceptional musical family, including uncles Gustav Hollaender, head of the famous Stern Conservatory, and Felix Hollaender, writer and dramatist with Max Reinhardt.

Young Frederick studied composition at the Stern Conservatory, and was one of Engelbert Humperdinck's master students. During World War I, Hollander served in the military as musical director, entertaining troops on the front lines in France. Soon after the war, he began his theatrical career writing stage music for Max Reinhardt's productions and was a house composer for such avant-garde literary cabarets as "Sound and Smoke" ("Schall und Rauch"), "Wild Stage" ("Wilde Bühne") and "Megalomania" ("Größenwahn"). In addition to writing his own popular music and lyrics, Hollander collaborated with many famous authors including Kurt Tucholsky, Klabund and Walter Mehring. It was during this prolific period that Hollander garnered fame and recognition for his series of "Songs of a Poor Girl" ("Lieder eines armen Mädchens"), written for his first wife, singer Blandine Ebinger. In the following years he went on to write numerous hit songs and over a dozen popular revues (often in conjunction with Rudolf Nelson and Marcellus Schiffer), including "Laterna Magica," "Das bist Du!," "Bei uns um die Gedächtniskirche rum" and "Der rote Faden." Hollander also worked with the sensational jazz band, Weintraub Syncopators.

Caught up in the cultural and artistic maelstrom of Weimar Germany, in 1931 Hollander opened his own highly successful cabaret-style theater, "Tingel Tangel," ensconced beneath Berlin's "Theater des Westens." His shows were among the top attractions of the day, hailed for their jazzy music, witty lyrics, and daring political satire. Hollander's courageous and openly anti-Hitler revues, such as "Spuk in der Villa Stern," made him an early Nazi target and nearly cost him his life. Within two years, Hitler's unrelenting rise to power would force Hollander and his second wife, Hedi Schoop, to flee Germany for the United States. 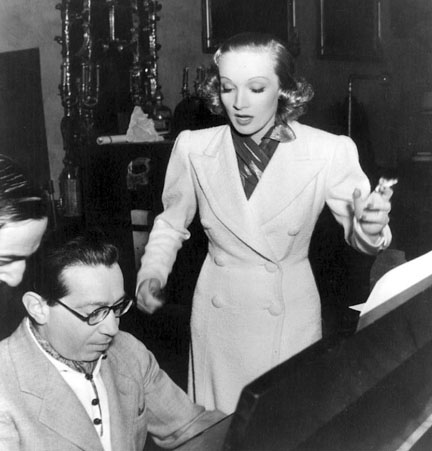 In 1933, Hollander arrived in Hollywood to discover that his "Blue Angel" reputation had preceded him - as did Marlene Dietrich - and he continued writing songs for the actress, including "Boys In The Back Room," "You've Got That Look," "Illusions," "Black Market" and "I've Been In Love Before." Hollander's Hollywood career spanned twenty-three years and included songs and musical scores for hundreds of films, among them "Sabrina," "Destry Rides Again," "Here Comes Mr. Jordan," "A Foreign Affair" (in which Hollander also appears as Dietrich's night club piano player), "Desire," and the cult musical "The Five Thousand Fingers Of Dr. T." He garnered four Academy Award nominations: 1937 for Best Song "Whispers In The Dark" (from "Artists And Models"); 1942 for Best Score (from "Talk Of The Town"); 1948 for Best Song "This Is The Moment," (from "That Lady In Ermine") and in 1953 for Best Musical Score (from "The Five Thousand Fingers Of Dr. T").

Hollander returned to Germany in 1956, where his music enjoyed a revival, presented in sprightly cabaret revues in Munich and Berlin. He continued to compose for musicals and wrote the score to the 1959 film, "Das Spukschloss im Spessart." Although best known for his musical work, Hollander also wrote several books: his autobiography "Von Kopf bis Fuss: mein Leben mit Text und Music" (1965); "Ich starb an einem Dienstag" (1972); "Ärger mit dem Echo" (1972); and "Die Witzbombe und wie man sie legt" (1972). Notably, his first novel, "Those Torn From Earth" (1941, written in English) was posthumously translated and published in Germany (by the Weidle Verlag) in 1995 as "Menchliches Treibgut."

For Hollander's lasting contributions to German Culture, he was awarded the Schwabinger Kunstpreis and in 1959 the Bundesverdienstkreuz (Order of Merit of the Federal Republic of Germany).

Art imitated life for Hollander once again when director Billy Wilder (for whom Hollander had scored the 1948 classic "A Foreign Affair") nostalgically cast his longtime friend as the singer/bandleader in an East German night club in the 1961 film "One, Two, Three." Later in life he remarried two more times. Hollander passed away in Munich, Germany on January 18th, 1976, just short of his 80th birthday. Thirty-six years later, Germany again honored one of its greatest composers by posthumously dedicating a square in Hollander’s name in the center of Berlin, named "Friedrich Hollaender Platz".

To this day, his timeless music continues to be performed and recorded throughout the world.